The Hall exhibits about 80 old and historic Scripture manuscripts and Scriptures in about 750 languages of the world. Guided tours around the Bible Exhibition Hall are offered for different groups: adults, university students, teens, and kindergarten and elementary school children.

Items on exhibit include:

· Historic Scripture Manuscripts such as the ‘Dead Sea Scrolls’, ‘Leningrad Codex’ and other scrolls and papyrus replicas of Hebrew and Greek Scriptures

· Korean Bibles – from the very first Scripture to present

· Scriptures produced by the Korean Bible Society and supplied overseas (about 1,500 editions in 750 languages)

For group visitors, we offer an introduction to the ministry of the Korean Bible Society, and guided tour around the Bible Exhibition Hall. 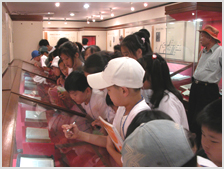 Group visitors are introduced to how the Korean Bible was translated and spread in Korea and to how Bible Work is carried out around the world by Bible Societies. Our staffs also offer detailed explanation about the individual exhibits in the Bible Exhibition Hall. Upon request, this Group Visit Program is also offered outside the Bible Society premises at churches and group gatherings.